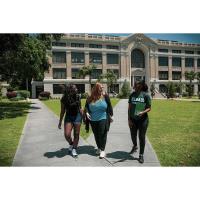 New Orleans – Delgado Community College will celebrate a century of service to the greater New Orleans community by hosting its 100th Anniversary Gala Celebration on Friday, September 23 at the National WWII Museum in New Orleans.

The evening will celebrate Delgado’s legacy while looking forward to its bright future. Opened in 1921 and named for its benefactor, Isaac Delgado, the college began as a trades school and over the decades grew to become a junior college and then the nationally recognized comprehensive community college that it is today.

The evening will feature a Chancellor’s VIP Reception from 6-7 p.m. followed by the gala from 7-10 p.m. featuring dinner, music and presentations. Entertainment will be provided by the National WWII Museum’s Victory Belles and Victory Swing Orchestra. Prominent local and state officials, community partners and friends, alumni and college retirees, as well as faculty and staff, are expected to attend the milestone event.

The gala will celebrate Delgado’s noteworthy role in World War II and its perseverance during other tough times, including Hurricane Katrina and the COVID-19 pandemic.

Locating the 100th Anniversary Gala Celebration at the National WWII Museum recalls Delgado students’ critical role in constructing the now-iconic LCVP, or Higgins boats, and the famous PT boats. Designed and built by the manufacturer and businessman Andrew Higgins, the LCVP was deemed “the boat that won the war” by Gen. Dwight D. Eisenhower because of their successful use during the Normandy invasion and other key actions.

As he geared up to build his boats for the military, Higgins stated, “We can't use ordinary hammer and saw carpenters, but we can use Delgado men.” The students attended classes at Delgado before working in the Higgins Industries plant next door to the college’s campus on City Park Avenue. The plant, which stood where Delgado’s administration building stands today, operated around the clock to meet production needs for the war effort.

The importance of what Andrew Higgins, the “Delgado men,” and the thousands of other Higgins employees accomplished in helping to secure the Allied victory has been noted in numerous stories and books about World War II, as well as on a monument installed at the site during the college’s 90th Anniversary in 2011. These citizens built more than 12,000 Higgins boats and 200 PT boats that were essential in every theater of the war.

During the past 100 years, Delgado Community College evolved into Louisiana’s first comprehensive community college and became one of the state’s largest higher education institutions. The college has helped to educate generations while advancing the aviation, construction, culinary, health care, hospitality, maritime, and other key industries. Delgado serves a diverse population, providing career training, academic education, and programs to improve the lives of students and support the New Orleans region.

In 2021, a study showed  that the century-old institution has a $588.1 million impact annually in the greater New Orleans region. The study also showed excellent returns on investment in Delgado, highlighting the college’s value as a regional economic powerhouse based on its higher education and workforce development activities.

For every dollar they invested in Delgado during fiscal year 2019-2020, students will gain $5.30 in future earnings, according to the study. Taxpayers will gain $6.80 over the course of students’ working lives for every public dollar invested in Delgado. The study also found that Delgado associate degree graduates earn an average of $10,200 more in annual income than people with a high school degree or equivalent. Many Delgado graduates transfer their credits to a bachelor’s degree program at leading universities in Louisiana and other states, increasing their earning potential.

Delgado’s Centennial celebration began in 2021 and was extended due to the pandemic. The celebration will culminate this fall on Founder’s Day, November 23, which is the birthday of the philanthropist businessman Isaac Delgado, who made a gift that established the institution.

Growth has been steady over the years, with several new locations and ungraded facilities coming into service since Hurricane Katrina. In August 2021 Delgado cut the ribbon on a new Advanced Technology building at the West Bank Campus in Algiers. In 2023, Nursing and Allied Health programs will move into a new building at the City Park Campus that is funded through a partnership between Delgado and Ochsner Health, a leading healthcare provider and educator in the Gulf South. Planning is underway for a new workforce education building at the City Park Campus as well.

In 2021, while navigating the pandemic, Delgado was ranked one of the nation’s top 50 community colleges by intelligent.com. Delgado’s science and mathematics and hospitality management programs were ranked as the best at any community college in the nation, and the business administration associate degree ranked second nationwide and best in the Southeast region. Delgado’s registered nursing program ranks among the top 10 in the country.

Tickets and sponsorships for the Delgado Community College 100th Anniversary Gala Celebration are now being offered through the Delgado website, www.dcc.edu/100/gala.aspx or by calling 504-671-5412.

Photo cutline: Delgado Community College students walk to class in front of Isaac Delgado Hall, the first building at the college which opened on City Park Avenue in the fall of 1921.

Delgado Community College celebrates 100 years of service to the New Orleans region in 2021-22. The oldest and largest community college in Louisiana, Delgado provides instruction online and at seven locations. Delgado offers students the most comprehensive array of education and training services available in the New Orleans region. Additionally, Delgado has articulation agreements with most of the state’s four-year colleges and universities that allow students to transfer their Delgado credits to bachelor’s degree programs. As well as offering degrees and transferable college credits, Delgado provides diplomas and certificates in many professional and technical areas. Workforce development is a priority at Delgado, hence the college’s well-known motto: “Education that works!” www.dcc.edu