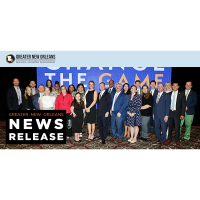 “Winning Economic Development Organization of the Year is a testament to the dedication and work of many,” said Michael Hecht, GNO, Inc. President & CEO.  “The staff, Board, NextGen Council, investors, economic development partners, educational partners, elected leaders, and community all share in the responsibility and credit for this recognition.”

IEDC’s Excellence in Economic Development Awards recognize the world’s best economic development programs and partnerships, marketing materials, and the year’s most influential leaders. The ‘Gold Rank’ for 2022 EDO of the Year is given to the leading economic development organization demonstrating goals and objectives, program innovation and continuity, leadership quality and consistency, performance benchmarks and measured metrics, and community interaction and impact.

“The GNO, Inc. team and all of the organization’s partners and stakeholders should feel incredibly proud of this remarkable honor of being named the Best EDO in the World,” said Richard Cortizas, GNO, Inc. Board Chair.  “This award recognizes the hard work GNO, Inc. is performing in order to transform and grow the region’s economy. Collectively, we all benefit from the new business opportunities and jobs that are created by their leadership in our region.”

In selecting GNO, Inc. for this honor, the IEDC judges were given the opportunity to learn more about numerous accomplishments that the organization has achieved over the past year, including: “As the Chair of the NextGen Council, I see firsthand the incredible work that the staff, volunteers, and investors put into the programs within GNO, Inc to advance our region,” said Josie Delaune, Chair of the GNO, Inc. NextGen Council.  “It is energizing to see this work rewarded in such a prestigious way, and I'm confident the energy will lead to many more awesome accomplishments.”

Louisiana Economic Development also was awarded "Best in Show" by the International Economic Development Council. This award is the top honor presented at the event and is given to the EDO who has exhibited overall excellence in all areas of economic development.
###
About Greater New Orleans, Inc.
Greater New Orleans, Inc. is the regional economic development nonprofit organization serving the 10-parish region of Southeast Louisiana that includes Jefferson, Orleans, Plaquemines, St. Bernard, St. Charles, St. James, St. John the Baptist, St. Tammany, Tangipahoa, and Washington parishes. GNO, Inc. works together with the business community; local, state, and federal governments; and other regional stakeholders to coordinate, consolidate, and catalyze action on key issues and opportunities that maximize job and wealth creation and retention, are relevant to the region as a whole, and create systematic impact.